On the last night of the conference, after missing most of the activities, Claire and Nancy decided to make an appearance at the cocktail party. Sam didn’t want to leave them alone, but had promised to meet his agent for dinner.

As they got in the elevator Nancy put her card key in her purse. “I don’t know if we should be doing this. Sam said we should just hang out in the room tonight until we’re sure they’ve taken Dan and Lacy in for questioning.”

“I know, but I don’t think we’ll be in danger at the cocktail party. They’ll be plenty of people there, I doubt if they’ll try anything in such a large crowd. I just want to see some people and have a drink with some of the girls.” 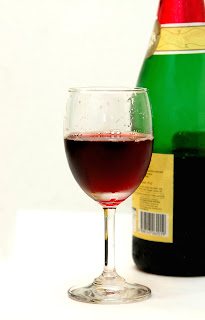 They got off the elevator at the lobby, and walked to the main ballroom. Tables were set up outside the ballroom, with salad and hot food and waiters crisscrossing the floor with trays of hot hors d’oeuvres. They walked over to the bar line. “I’ll have a red wine, thank you,” Claire said to the bartender.

Claire noticed a bottle of wine with a bright orange label, and she recognized it immediately. It was the same type of wine bottle, and brightly colored label that was on the table at the small island, when she saw Dan, with the blood his shirt. Her arms tingled and a chill ran through her body.

The vision of what she saw on the island appeared in her mind once again, as she brought the glass of wine to her lips and took a sip.

Thanks for stopping by, return to Tuesday Tales for more stories from talented authors.
Posted by Carolyn Gibbs at 9:19 AM 6 comments:

In honor of Thanksgiving Tuesday Tales is doing a picture prompt for the holiday. Enjoy, and have a Happy Thanksgiving.

The house smelled marvelous as the aroma from the roasting turkey and stuffing permeated the air. Ellie walked into the dining room. The shine on her mother’s good china gleamed back at her as sunlight streaming in from the window hit it.

“It looks beautiful, Jessie. You did a great job.”

Ellie was determined to make this the best Thanksgiving, and since it was the first holiday the family would spend without their beloved mother, she didn’t want any unnecessary carrying on. She smiled to herself as she reached in her sweater pocket and pulled out her solution.

“And we'll have a peaceful meal. I made up place cards, the seating arrangement helps when trying to keep the peace.”

“Are you sure that’s going to work?”

“Sure it will." She placed her card at the head of the of the table and Jessie’s to her right. The next card was Lydia’s, her ally and younger sister. She put the card at the left of her seat. The next card was Jane, her nemesis and oldest sister. She put the card at the far end of the table, and Jane’s husband Ted, next to her at foot of the table. The next cards were her brother, Phil, his wife, and their cousins Gina and Eddie who were both single. Since they were neutral, she sat them in the middle of the table to help absorb any shockwaves from the opposite end. Ellie stepped back and looked at the table. She picked up Eddie's card and switched it with Phil. No that's not right. She walked around the table shaking her head and switching place cards.

When Ellie was finished, Jessie walked around the table and noticed Aunt Jane was sitting next to her mother.

To read more stories from great authors, return to Tuesday Tales.
Posted by Carolyn Gibbs at 12:38 AM 8 comments:

Welcome to my blog and another installment of my WIP Island Surprise. The week's writing Prompt is sexy. The story continues were Claire is anxious to leave the pool area after talking to Lacy and Sam is trying to reach her.

Sam took the last of the stone steps two at a time. When he reached the bottom, the landing curved and he lost sight of Claire. When he saw her last she was walking toward the hotel lobby. He stopped and scanned the area carefully. No sign of her. She probably went to her room. Sam headed for the elevators.

He spotted her in the crowd, his heart hitched at the sight of her. He hoped she had forgiven him for not sharing what he learned about the body being found. He thought he was protecting her even though it was also self-serving not to tell her.

She turned around, and searched the crowd.

At a distance their eyes met. Sam took a breath and unknowingly held it. He gazed at her and appreciated the beauty he was observing. Then a truck load of people, some of them conference attendees, walked through the lobby into their path and he lost her again.

“Sam…” Claire yelled out as she caught a glimpse of him across the huge lobby. Her heart sped up as she bobbed up and down trying to see through the crowd that was passing by. She ran around the people searching for him. She spotted him near the elevator bank and ran towards him.

He stood there and watched as she ran to him, he opened his arms. She ran into his arms, and he held her tightly. He eased back, remembering they were in a crowded lobby.

He was the first to speak as his gaze danced over her. “I’ve been looking for you.”

She was breathing hard, and tried to catch her breath. “I’m sorry I ran out on you before. I was just with Lacy, she knows more than we thought she did.”

Sam looked around and shook his head and put his finger to his lips. “Not here.” He pushed the elevator button and put an arm around Claire’s shoulder. He happily noted she didn’t squirm or pull away, instead she leaned into him. Amongst all the drama of the moment, he felt warmth rushing over his body. He thought maybe she finally trusted him. He saw her reflection in the elevator door they stood in front of. She was a gorgeous woman, even if she weren’t wearing that sexy bathing suit with the thin cover-up large tee shirt.

The elevator door opened and they hurried in. The door shut and they were alone.

“First I want to say I’m sorry for getting at you earlier,” said Claire facing Sam. I know you were trying to protect me, and I realize now you’re probably right.”

“Really, right about what?”

“I just spoke with Lacy at the pool and mentioned that they found a woman’s body on the small island, and the word murder popped out of her mouth, then she got nervous and left.”

“Really, all this time we’ve been worried about Dan, when she was probably the one to watch out for.”

The elevator stopped at a floor and a few people got on. They stopped talking. Sam reached for Claire’s hand as they stood next to each other for the next three floors, then got out on the tenth floor.