Thanks for stopping by and reading another installment of Island Surprise. This week's writing prompt is chase.

Claire stood still in the middle of the lobby, oblivious to the people walking around here as she watched the couple disappear into the crowd.  How was it possible the wife was still alive? Nancy, just as stunned stood beside her.
“I can’t explain it,” Claire shook her head in disbelief.

“I can explain it,” said Sam. “The woman’s not dead. I hate to say this, but you were mistaken at what you saw or think you saw.”

And just like that Sam was back in the dog house after just returning. She couldn’t believe he would doubt her.
“I know blood when I see it, and I saw blood and plenty of it.” Claire responded trying not to raise her voice, after all they were in the middle of the lobby.

Nancy jumped in between them. “Well guys maybe we can discuss this later. We have to take our spots for the book fair.”

“I’m not signing at this one. I’ll be at my publisher’s book sale tomorrow,” said Sam. I’m just going to walk around say hi to those I know, and maybe sit with Claire if she’ll let me.” He flashed a shy smile with dark glistening eyes. She couldn’t resist.

“Yeah, okay. I’ll be sitting in there somewhere. I don’t know where they put me.” Even though she didn’t like that he doubted her, she was always a sucker for his dark brown eyes and smooth voice.

The three of them walked towards the hotel’s Ballroom which was set up for the book fair. The massive room was arranged with rows of long tables with mountains of books on them and signs with author’s names. Nancy left Claire and Sam to find her table. Claire went off in the other direction, searching for her table. Sam waved to familiar faces while quietly chasing after the woman he came there to be with.

****
Dan Roberts lead Lacy, his wife of four days, through the crowded hotel lobby. As they walked hand in hand, the crowd seemed to part for them as though they were royalty. Along the way, hotel workers nodded or smiled acknowledging them. To the locals, Lacy was considered island royalty. Her father was the prominent real estate mogul, J.D. Hunter, known as the Donald Trump of Hawaii.  J.D. built dozens of luxury apartment buildings and hotels, including the one his daughter was honeymooning in. Dan was a partner in a boutique architecture firm that did many jobs for J.D. To secure his rise to the top, he swept J.D.’s daughter off her feet while he wooing her father’s business. He was now leading the team for the expansion of the Royal Continental Hotel, on the neighboring smaller island.

As Dan and Lacy walked towards the restaurant, they passed an easel in the lobby advertising the Book Fair, which was open to the public. Dan remembered the pen. He would have to pay Nancy Wells a visit. He wanted to see the woman he needed to stop. He wanted to know if she could identify him. Did she get a good enough look at him on the island, or is he jumping the gun on assuming that she did?

The following is an excerpt from Island Surprise, where Claire recalls her history with Sam. Picture prompt - Rustic Stone Arch in Central Park, New York City.
Claire felt the fallen leaves crunch under her sneakers as she and Sam hiked through the Ramble in Central Park. They were taking a break from planning their novel, and also doing research, since the park was prominently featured in their story. 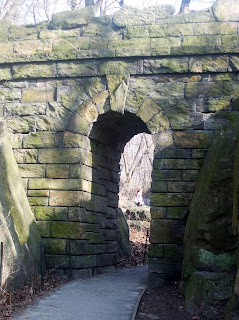 The terrain grew more challenging, and Sam reached a hand out to Claire who gladly gripped it. They leaped from rock to rock, Sam in the lead and Claire laughing behind him. They made their way towards the Rustic Stone Arch, which was always a favorite spot for Claire. Sam led her through the narrow walkway, guiding her with a hand on the back of her waist as they walked under the arch.

While walking through Claire looked around. “Isn’t this beautiful?”

“Yes, beautiful,” agreed Sam admiring Claire as he said it. He led her to the path next to the arch heading towards Bank Rock Bridge and stood facing her. With one hand resting on her shoulder, his lifted her chin up with his other hand before she could object. He bent down to meet her, and Claire was conscious of the moment.

She felt the breeze around them settle as if time stood still, she overheard the conversation of the birds in the trees, which sounded like a lovers spat. Sam’s lips lightly touched hers. Then together they deepened the kiss, as she tasted the remnants of the mocha latté and mints they shared at Starbucks. This wasn’t part of the scene they were writing, this was real life and she was enjoying it. She was attracted to Sam at the start and was glad he made the first move. She ran a hand through his curly hair, ignoring the apprehension she felt of getting involved with a writing partner.

Welcome to this week’s installment of my Tuesday Tales story Island Surprise. Thank you for stopping by, feel free to leave a comment.

Nancy reached out and grabbed the bed post. She felt light headed and needed to sit.
Claire looked over and saw her friend’s reaction, and stopped talking to Sam. “What’s up Nance? Who was on the phone?”

“It was a message for me. Someone’s telling me to forget what I saw on the island, and they’ll forget about me,” her face turned pale as she recalled the words.

“What? You didn’t see anything on the island to forget about. Why would they be calling you?”

Claire went to the phone and replayed the message, and then the color from her face drained as she sat down on the opposite bed. “I’m not even sure what I saw, but this has to be related to it. Why would someone call you? I wish he would forget about it too. I’d like to forget the whole thing, but I can’t, especially now”

“But how can you forget when you don’t even know what you really saw?” Nancy was shaking her head in wonder.

They were both oblivious to Sam standing there watching them like he’d just turned on a TV drama he’d never watched before trying to play catch-up. “Hey girls, what’s going on? Whatever you’re trying to forget, don’t forget to tell me first. I want to know.”

Claire looked up at Sam and quickly recanted the morning’s events to him. He sat on the bed next to Claire. “We really don’t know what you saw. There could be a logical explanation, and there usually is. But I don’t get why someone is now harassing Nancy. Why use her to get to you?”

“Right, and I didn’t think he got a look at me while I was on the island. If he did it must’ve been when I was rowing away. But how could he see me from that far distance.” Claire started rubbing her hands and cracking her knuckles, something she did when she was nervous. She made attempts in the past to curb this habit, as a writer the last thing she needed was hand joint problems. But she was cracking them now. She looked at Sam. “So what do you think?”

He reached over and gently put a hand over her hands, causing her to stop the cracking. He held her hand rubbing his thumb softly over her fingers.  In a manner of seconds he felt her nervous energy fade away, and the warmth emanating from his hand spread to the rest of his body. Boy if she only knew what this touch was doing to him. He enjoyed it, but now he needed to help her, and he needed all his senses. Sam slowly released her hand, restoring his ability to think clearly. He cleared his throat. “I don’t know what to do. I don’t think you have enough to get the police involved.”

Nancy picked up her conference tote bag and stood up. “Maybe be we could do a little snooping on our own and find out who the honeymoon couple is. See if it looks like they’ve checked out. If he did anything to her, why would he still be here? Wouldn’t he want to check out and get out of here fast?”

Nancy walked over to her suitcase and pulled out a box of her pens. “I’m going to be signing at the book fair for Arrow Publishing this afternoon, so I need my pens.” She gave a pen to Sam.

“Thanks,” he looked at the pen. “Ah Midnight Rising, I’ll come by and buy one from you. I remember when this story first started to take shape.”

“Thanks, Sam. The story changed again since you last read it. I’m so glad it’s finally out.”
Claire picked up her bag and Nancy waved a pen at her. “I have one from yesterday. I don’t want you to run out.”
“Oh, I don’t think I’ll run out. I always over-buy.”

Sam followed the women out the room, closing the door behind him, checking to see that it locked.

The three of them got the elevator and walked towards the grand lobby. No matter how stressed Claire was the island trees and plants decorating the lobby always managed to take her breath away and calm her down. Nature was always a good de-stressor for her, coming in close behind having her hand held by Mr. Sam Stewart. Even though she didn’t verbalize it upstairs, there’s no doubt the affect this man had on her. Not only did she need to look out for a possible killer, she needed to watch herself around Sam. Claire didn’t want to get swept away again. The last time was too painful for her. She knew she was smarter this time.

As they walked through the lobby towards the conference center, a couple crossed the lobby in front of them. Claire's pressure shot up. Oh my god, it’s him. The honeymooner! He and his new wife just walked across the lobby hand in hand, just like… well, just like regular newlyweds. Claire was dumbfounded and Nancy shot her a look, but kept her mouth closed. They watched as the couple headed towards a restaurant on the other side of the lobby.

“What happened? What did I miss?” Sam felt the tension between the two women.

“That was them. The man and his wife,” Claire raised her hands, and held them in a tight fist, fighting the urge to indulge herself.

“So she’s not dead,” Sam looked after the couple.

“Then why is he harassing me?” Asked Nancy quietly as a wave of conference goers walked around them headed for the book fair.
Posted by Carolyn Gibbs at 10:33 PM 8 comments: