Welcome to my blog and the My Writing Process Blog Tour. First I would like to thank author Jeanine McAdam who tagged me in her blog post last week. Jeanine is a fellow Secret Cravings author and we’re also members of the RWA/NYC Chapter, she writes fantastic sexy cowboy stories with a lot of heart.

What am I working on?
I’m currently working on a women’s fiction type story with a romantic edge. It’s about a woman who’s made a name for herself as a travel photographer and now has to return home to run her mother’s B&B. As soon as she drives up she is faced with the one person, who’s kept her away from home for so long, an old flame she’s never gotten over who’s doing the renovations on the inn.  Any big problem she has is that she can’t cook, and that’s not good when you’re faced with running a B&B. She has the support of friends and family to help her along. I’m picturing this as a series, its set in a small town in upstate New York.

How does my work differ from others of its genre?
I enjoy writing stories that are based on reality. I also like writing about people that already have a connection, like reuniting old lovers, which I did in Love and the Economy and working partners in Murder in Paradise rather than two people who just randomly meet. I like heartfelt stories, but I also like taking readers on an adventure, someplace they haven’t been before.

Why do I write what I do?
I like writing about how a person changes their perception about their situation, which is really how change begins. It’s encouraging and enlightening to see how much the little things we do for each other mean to those around us, especially our significant others. While writing Love and the Economy I enjoyed showing how the relationship changed once the heroine, Andrea, started to see things from her ex-husband’s point of view and vice-versa.  In Murder in Paradise, the hero and heroine are authors who write together and have become friends. They’re also of different races, but that’s not a factor in the story, it’s just describes who they are. I have to admit that when I created the hero Sam Stewart, visions of Nathan Fillion as Richard Castle crept into my head. I’m a big Castle fan, but I wanted it to be a writing partnership rather than a writer/cop relationship. In real life my fiancé and I were partners in a job where we worked together very closely. Someday I will write a story loosely based on it.

How does my writing process work? I start brainstorming ideas. I usually start with a premise or sometimes the characters. It changes depending on the story. I keep asking the “what if” question until I’m satisfied I’ve got a feasible story that has wings. When I wrote Murder in Paradise, I wrote a 300 word start to a story based on a picture prompt on the Tuesday Tales blog. The picture was of a cute row boat lying on an isolated beach. I pictured my heroine, Claire, getting out of that row boat and making an incredible discovery on the little island, while she’s attending a writing conference in Hawaii. I recently started using WriteWayPro, writing software to write my stories. I write each chapter and scene separately and have a place for adding in notes. 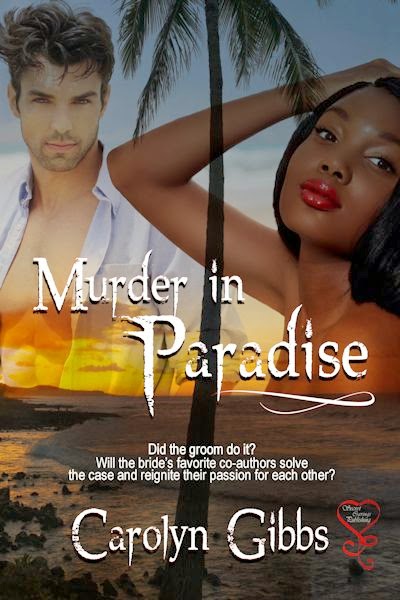 Once I’ve got an idea and the characters in place, than I’m off and running till I get the end, sometimes taking a detour or two. I had fun writing Murder in Paradise, it my first time writing a romantic suspense, and I liked bringing the characters to the edge. I look forward to writing more suspense stories; they’re exciting and fun to do.

You can read excerpts from both novellas on my website http://www.carolyngibbsbooks.com/


Lena Hart
Lena Hart is an author of sensual romances with alpha heroes and smart, sexy heroines. Though she enjoys romance stories of all kinds, she mainly writes interracial romances with a hint of mystery and danger. When she is not writing, reading, or conferring with her muse, you can find her on Facebook, Twitter, or blogging about everything and nothing. To learn more about Lena and her work, visit www.LenaHartSite.com and her blog at http://scatblogging.blogspot.com/

Karen Cino is a single mom living in Staten Island, New York, with her two adult children, Michael and
Nicole, and three cats. Secret Cravings Publishing published her debut novel Roses in April 2012. Her second novel The Boardwalk takes place in her hometown of Staten Island, New York.  Her four book Mystical Wonders Series is also set in her hometown. Her next Contemporary Romance Love Challenges and Desires is due out in May 2014.  Currently she is working on a Baseball Series. Visit her blog at karencinobooks.blogspot.com and her website karencino.com.

Posted by Carolyn Gibbs at 9:22 PM