Welcome to this week's installment of Island Surprise. This week Tuesday Tales writing prompt is dawn.

After an hour of talking about the book they wrote together and doing a sequel, Claire finally looked at her cell phone for the time. “Wow, it’s almost 2 AM. I’m going to bed before we see the dawn rising up. Although that would be a beautiful sight here.  I didn’t realize how late it is.”
She stood up and pushed her chair back by the table. Sam followed her and closed the terrace door as he came into the suite.
Claire started to unbutton her blouse and looked over her shoulder at Sam, who was trying not to be obvious while sneaking a peek at her. She reached down on the bed and picked up the nightshirt the hotel staff provided per Lacy’s request. It was a large white cotton tee shirt featuring the hotel’s name and logo.
They also provided a pair of grey cotton boxers for Sam. He picked them up. “Not bad. They really thought of everything, huh.”
“Yes, it was very thoughtful of Lacy, so we wouldn’t have to sleep in our clothes.” Claire was on her way to the bathroom to change.
“Or in the buff. Which might not be such a bad thing.” Sam said the second line in a lower voice thinking Claire wouldn’t hear it.”
“Oh, I heard that, Sam,” She yelled from the bathroom. “Wouldn’t be such a bad thing. That remains to be seen.” She giggled.
“Yeah well you can’t blame a guy for trying.” Sam took off his clothes. He was putting them over a chair when he heard her come out of bathroom, and saw her in dresser mirror he was facing. Wow. He had never seen Claire with so little on before. She was completely gorgeous. She walked into the room, clean faced, no make-up, hair pulled back in a headband, wearing just the white tee-shirt. The shirt hit her thigh high, and as Sam felt revealed the best part of her long legs. The shirt was large, but he could see her shape underneath. He could see that she wasn’t wearing a bra, and see her breast swaying naturally beneath the cotton. He even saw the faint outline of her dark areoles showing through the shirt, and felt his boxers tenting in appreciation. He angled himself to the side, to hide his reaction. He didn’t want to scare her off by revealing his obvious arousal.
He knew that Claire was attracted to him, but he also knew he had to move slowly with her. She had said in the past that she really enjoyed working with him and wanted to keep their relationship on a professional level, although there’s no doubt that a friendship had formed. Well he wasn’t about to blow it all now by displaying the expanding bulge in his pants she elicited from him.
Claire walked over to the dresser and put her clothes in the top drawer. “Have you given any thought to the sleeping arrangements?”
A picture of her on top of him grinding into him popped into his head, causing his tent to rise a bit more at his own suggestion. “You can have the bed. I’ll sleep on the couch.” He walked toward the closet away from her, to see if there was an extra blanket in it.
“Don’t be silly. This is a king size bed. There’s plenty of room for the both us. It’s so big it’s almost like having your own bed.” She turned off the table lamp and got into the bed nearest the terrace door. 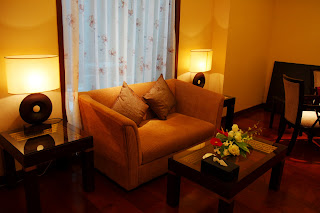 “Sam, the couch is really a love seat, not a full size couch. You can’t sleep on that, it’ll kill you. Just get in the bed, please.”
Sam pulled his side of the covers back and smoothly got in, careful not to reveal the package he was guarding from her. “Okay, if you say so.”
He lay down and his erection stood straight up. He turned on his side to hide it.
Claire pushed the sheet off her, revealing her bare arms.  “See that’s better. We both need our sleep. And besides, this bed is so big, it’s like we’re not even in the same bed.”
Yeah right.
Sam took a deep breath and detected a hint of her lavender perfume that was wearing off from the day. He couldn’t help himself. His mind drifted. He longed to bury his face in her neck and breathe it in. Instead he made due with taking deep breathes as the spicy aroma engulfed him.
After awhile he realized this wasn’t working for him, her signature scent was stimulating him more and keeping him awake. He tried counting backwards from 100. Maybe that would work to level off his arousal so he could get some sleep. Just lying there thinking about her cologne or the fact that he could simply reach out and touch her body was enough to keep him hard all night. And frustrated…95, 94, 93.